Six days and a whole lot of trash!

Six days and a whole lot of trash!

When Shawn Bath and his small team of two showed up to Rose Blanche, NL they had no idea what to expect. Driving down the bumpy one way streets, it was easy to see that Hurricane Fiona had been here. Wood from destroyed stages floating in the water, pieces of siding from sheds and houses that no longer stand. It was hard for the team to even know where to start. So down to the fishing wharf they went, to hopefully talk to some locals.

That is when they were told about the giant net ball.

Sheds dragged into the ocean by Fiona, containing tons of fishing gear that had been stored for over the last 100 years, created a giant mass on the bottom of the harbour. The locals informed the CHI team that others had come to look at the tragic mess, but they were unwilling or unable to touch it. “You’re the 3rd group to come take a look at this” one of the local informed them “One group said they wouldn’t touch it, the other said they’d be back, but we never saw them again.”  Shawn and his team were up for the challenge.

Day 1
To get a better idea of what they were dealing with, Shawn suited up and did a small dive with camera in tow. Like an iceberg, this pile was far larger underneath the surface of the water. 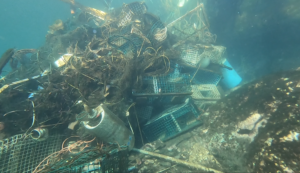 Tons of nets, ropes, lobster traps, tools, boat motors, creosote wood and worst of all, trapped marine life. After getting footage needed the team was able to regroup and come up with a game plan. The remainder of the day was spent removing two boat loads of surface debris. I was clear this was going to be a slow and steady undertaking. 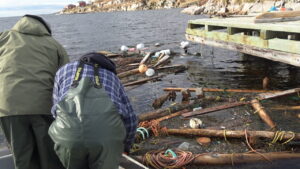 Day 2
After removing some of the surface debris on the previous day, it was time to start working on the mess below. With the use of their crab hauler, along with physical man power, they begun the long task of pulling up the submerged debris. Pulling up and cutting ropes/nets over and over again, the pile truly felt never ending. So much tangled and bound together, pieces of roofing weighing it down even further. 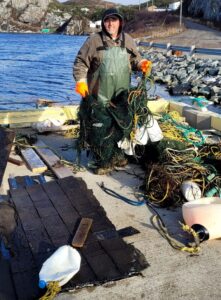 After piling the boat with as much as it could handle, along with dragging more behind them, the team then moved on to piling the debris in a safe area. To end the day they found an abandoned fishing bin, which they made quick work to drag and remove from the ocean. 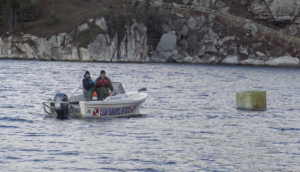 Click to see video of the fish bin being hauled out!

Day 3
On to some bigger pieces was the goal of this day. Boat motor, numerous lobster pots, squid jigging drums, fish drums, creosote wood and any nets/ropes that were tangled in these items.

After a long day of back breaking work, it finally felt like a serious dent was being put into this mess.

Day 4
This day marked the largest amount they had taken out yet. A giant piece of creosote wood, that had been weighing the pile down immensely, finally got its day in the sun.

Huge amounts of rope and net to follow, slow and steady but never ending. More lobster pots, power tools and yet another boat motor!

Day 5
Another amazing day on the water today with another couple thousand pounds of ocean trash removed. Salmon, herring and lump nets as well as even more lobster pots.

They even found their 3rd outboard boat motor! 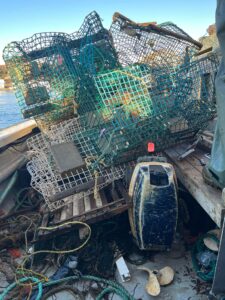 They also had a surprise, the crew of Atlantic Healthy Oceans Initiative came by to lend some manpower. 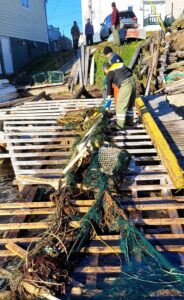 Day 6
The big day. After so much hard work the team had put in, they knew that with just a bit more, today would be the last day. Team member Trevor Croft had organized a time to get help from the town of Rose Blanche. At 9am the help showed up in the form of a front end loader. Shawn’s team got to work tying onto the massive net pile left in the ocean, in hopes that the loader would be able to pull out the remaining pile.

As they were working, the crew of Atlantic Healthy Oceans Initiative also showed up on the scene. Once everything was secured, everyone held their breath as the loader began to pull. With a massive “SNAP” the rope let go, flying back and breaking the window of the loader! Unfortunately the load was just to larger for this loader to handle. With the town staff unable to help any further at this time, it was up to the team to keep going. The CHI team, along with the help of some of the AHOI members, the task of cutting this pile smaller began. 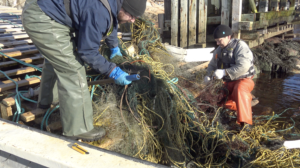 After much cutting, finally the team was able to get ropes tied around the mass, tying floats to it. The plan was to drag it with The Catch’a The Day (CHI’s boat, and the only boat on the scene) over to the wharf in hopes the towns front loader could now handle it. 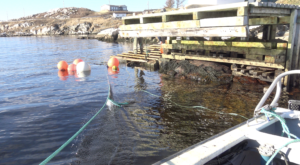 As the AHOI members handled the piece that was cut off on shore, the CHI team began to drag. Slowly but surely, the mass was finally hauled over closer to the wharf. CHI member Trevor Croft then used his personal truck to complete the haul to the Wharf. 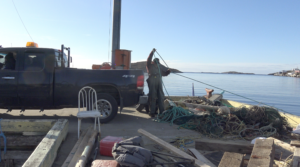 Once the mass was secured CHI team members Trevor Croft and Grace Corrigan left to hunt down the town workers and their front loader. In a community like Rose Blanche, which has no cell service, you have to find people the old fashioned way! Finally, after some searching, the loader was now on the wharf and the process began. 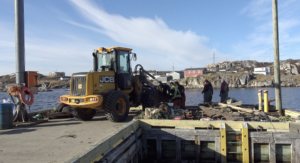 Members of the CHI team, AHOI team and town staff started the process of tying the pile to the loader. Little by little, tying and untying, the suspense was gripping. 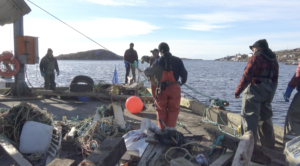 Then finally, with one final pull the giant mass was free! Like a slug made of trash, it crawled out of the ocean. 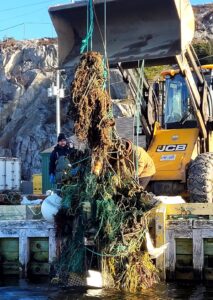 Click to see the video of the pile being hauled up!

A roar of cheer and relief came from everyone, as they all scrambled towards the pile to search for any creatures still alive and trapped within. 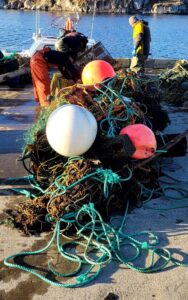 After spending time removing numerous crabs and placing them back into the ocean, exhausted, everyone called it a day. 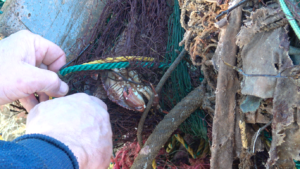 The CHI team still has a lot of work ahead of them getting everything removed from the wharf, but they can rest easy knowing that this mass of nets and debris will no longer be forever fishing! Thanks to everyone who helped us make this happen!

About the Author: Corrigan